Look at this equality:

They are true structurally. In principle, You can just replace one side of the equality with the other side without any extra comment. However, we usually like to describe these in terms of processes. For the first equality, we might say that adding the first two and then the sum to the third is the same as adding the first to the sum of the last two. For the second equality, we might say that from left to right it is multiplying through a set of parentheses, and from  right to left, it is factoring  something out. The italics are in the language of processes. Thus, when does the structure matter? Here is a strange example that I observed when teaching differential equations.

There is a technique in which you multiply both sides of a first order equation by something called “integrating factor”. The point is to write one side of the equation as the derivative of a function. For that, you need the product rule for derivatives: The derivative of a product of two functions is the derivative of the first times the second, plus the derivative of the second times the first. In symbols,  we can write the product rule as \( (fg)’=f’g+g’f \) or many other ways. When moving from left to right we are doing something, we find the derivative, we multiply, we add. However, it seems that when moving from right to left, we are not doing anything. We just replace \( f’g+g’f \) with \( (fg)’ \) . Indeed, the mere fact that we can just replace the right side of the product rule with the left side was quite unacceptable for one of the best students of my class (hence he couldn’t see the logic behind the integrating factor). I would like to see more examples in which understanding structure really matter.

“Plan for the mess” is one of my favourite teaching ideas. The idea is to bring students to a point where after a heavy messy work (most of the time calculations and symbol pushing) they say “why I didn’t see that earlier!” Here is how recently I used the idea in my linear algebra class.

The students had just solved a couple of two equations with two unknowns by whatever tools they had from highschool. Many of them had no idea about any geometric interpretation of such equations (i.e., solution, if there is one, is at the meeting point of two lines), and of course, none knew the vector interpretation in which, say  ​\( \begin {cases} 2x + 3y = 4 \\x + 2y = 3\end{cases} \)​, can be thought as ​\( x\begin {bmatrix}2\\1\end{bmatrix}+y\begin {bmatrix}3\\2\end{bmatrix}=\begin {bmatrix}4\\3\end{bmatrix} \)​. Of course, one should be too naive to assume that students immediately appreciate the importance of having several  interpretations for the same thing. Here is where you plan for the mess.  Thus, I asked them to solve a system of three equations with three unknowns such as ​\( \begin {cases} 2x + 3y+4z = 4 \\x + 2y-z = -1\\3x-y+2z=2\end{cases} \)​. It was “fun” watching students messing around with the equations, substituting this into that, sometimes eliminating this unknown, the other time eliminating that unknown until they got the answer: ​\( x=0, y=0, z=1 \)​.

Learning from a hard way is unforgettable!

Okay, for a long time, I didn’t know what to blog about. Now, I have decided to write about my teaching ideas that take ages to turn into a piece of research. That is why I have started with this strange title for my first blog. The title comes from the exact same phrase coined by Lakatos in his book Proofs and Refutations.  Here is how I used the idea recently.

Last week, I was going to teach the definition of a convergent sequence. Previously, we had played a lot with sequences geometrically: how they are represented on a number line and how they are graphed as a function on the coordinate plane. We hadn’t done any calculations; just we drew a lot of figures to see how different sequences (i.e., convergent, divergent, bounded, increasing, decreasing) behave graphically.  The question I (as the lecturer) had to answer was which “theorem” could justify and motivate the definition of a convergent sequence. Indeed, at that stage of students’ knowledge, there was perhaps only one choice; but, surprisingly that choice seemed to be a perfect fit:  if a sequence converges, then its limit is unique. There was only one small problem, students have no reason to think otherwise: how on earth a convergent sequence could have two limits? Thus, I needed to raise the question and also play devil’s advocate. Here is how the plan goes in the class.

I: How do we know that this sequence has only one limit (I drew the following figure)? 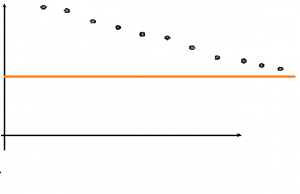 Students: What? Obviously, it has only one; see, it is getting closer and closer to the red line.

I: But, what if there is another line very close to the red line that the sequence is getting close to it too (I didn’t draw that other line on the graph).

Students: It (the sequence) is going to pass that line; see (one of the students drew the following (blue) line): 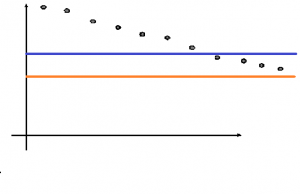 I: What if the line I thought of is closer to the red line.

Students: After a few other terms, it is going to pass that line as well.

Here, suddenly one of the students said: “What if the sequence also passes the red line?” As a result, I changed my role from someone who was “against” uniqueness to someone who was defending it.

Then, I cheated and I told the rest of the story! After all, it was the first time that I tried to generate the definition of convergnce of a sequence via a theorem in the class. I more motivated the definition and less generated it, though, we were very close to hit the target and generated a number of key ideas that were used in the definition. Next time that I teach sequences, I’ll try to go all the way and report it in another post.